Good day. This is Mark Galang with another post about music production in compliance with the requirements for the Berklee College of Music course called “Introduction to Music Production”, hosted for free by Coursera. In this post, I will discuss how to use the five most important synthesizer modules. These are your oscillator, filter, amplifier, envelope, and low frequency oscillator or LFO. For this tutorial, I will be using three kinds of software synthesizers namely RGC Audio’s Z3ta +1, MinimogueVA, and Mothman 1966. We can also consider this tutorial as a sort of crash course into subtractive synthesis.

In any synthesizer (even those that play back samples), the oscillator is the sound source. It produces the waveform/s that you need to shape to produce the desired sound. The most basic parameter we get to control in an oscillator is the waveform selection. We usually have a number of waveforms to choose from including sine (fundamental frequency only), pulse waves such as square and triangle (fundamental frequency + odd harmonics), and sawtooth waves (fundamental + odd and even harmonics).

The MinimogueVA (obviously modeled after the Minimoog) has a couple more parameters other than standard waveform selection. You can adjust the tuning and the register of the oscillator as well as apply an overdrive (distortion) effect.

The Z3ta is the most complex of these softsynths. Its oscillator section has more choices for waveforms along with more parameters to shape them. There is even an option available for users to draw their own custom waveforms.

More complex waveforms such as sawtooth can often sound harsh, and this is why a filter (more properly called voltage controlled filter or VCF) is present in all synthesizers. The filter functions much like an EQ except that in synthesizers, we can expect its parameters to change over a short period of time. The most common kind of filter in a synthesizer is a low-pass filter, the rationale being it is the best filter for cutting out brightness or harshness in the fastest way possible. In a synthesizer, the cutoff parameter is probably the most important. In a typical low-pass filter, raising the knob or slider for cutoff will raise the cutoff frequency meaning that you cut off less of the high frequencies and make the sound brighter. Lowering the cutoff knob will cut more high frequencies, making the sound of your oscillator darker.

In the MinimogueVA, the filter’s resonance is aptly called emphasis. Contour Amount adjusts the Q of the filter and velocity adjusts how fast the cutoff knob responds:

The Z3ta’s filter can be changed from the standard low-pass to others such as notch, band pass, and high pass:

The synthesizer’s amplifier works by raising the amplitude of the signal coming from the oscillator after it passes through the filter. The most basic control over the amplifier is the master volume section of the synthesizer as shown in all three featured synthesizers: 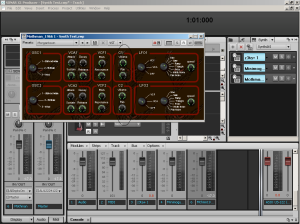 However, we can also have more specific control over the amplifier, allowing us to shape how each note is articulated. This is where we make use of the…

The envelope is one component of the amplifier that adjusts the amplitude of the sound at certain points over a very short amount of time. The amplifier’s envelope has four parameters:

Attack Time – The amount of time it takes for the signal to reach peak amplitude after a note on command (i.e. pressing a key).

Decay Time – The amount of time it takes for the signal to reach the designated sustain level.

Sustain Level – A designated amplitude level during the main sequence of the sound’s duration. The level of the sound after decay time has passed.

Release Time – The amount of time it takes for the sound to go from sustain level to zero after a note off command.

These parameters spell out conveniently as the acronym ADSR.

By adjusting these parameters, we can emulate the responses of various instruments such as the organ, violin, brass, piano, etc. For example, the organ has a “switch” type of envelope, and so we would set attack to 0, decay to 0, sustain level to any amount desired, and release to 0. If we want the synthesizer to have a piano-like response where the note dies off slowly after pressing a key, we set attack to 0, have a long decay time of about a few seconds, and then set sustain level and release time to 0. If we want the sound to “swell”, we set the attack time above 0.

The amplitude envelope generator is pretty much standard in all three featured synths, although the MinimogueVA has got envelope controls for filter as well and the Z3ta has additional parameters beyond the traditional ADSR: 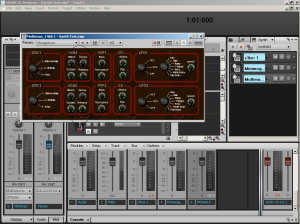 Other than willfully adjusting all the parameters of our synthesizers with our hands, you can assign an LFO to do this for you in a cyclical manner. An LFO typically operates at a frequency below the threshold of hearing, typically at a repetitive pattern determined by the kind of waveform used and the rate at which the LFO operates.

We can use the LFO to have control over the oscillator for vibrato effects, the amplifier for tremolo effects, and the filter for automatic filter sweeps.

The Mothman’s LFO can be assigned to the oscillator or filter. You can select the waveform as well as adjust its speed. 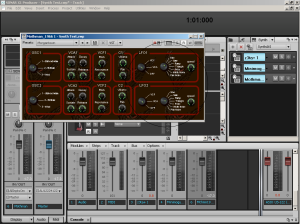 For the MinimogueVA, the third oscillator (OSC3) can be used as an LFO and can be assigned to various parameters:

As for the Z3ta, we can make use of the modulation matrix to route the LFO to control the other components of the synth ranging from the oscillator to the main volume control:

And so this ends a rather lengthy discussion about the five most important modules of any synthesizer.

It took me quite a while to write this tutorial but I think I could improve on this tutorial through video and audio examples. As of this time, I’m not capable of capturing video for a demonstration. If time permits, I will record some audio examples that demonstrate the functions of each synthesizer module.