I just read a news item dated September 30, 2014 that says LTFRB executive Ariel Inton has proposed a ban on private vehicles on EDSA during peak hours as a solution to Metro Manila’s traffic woes. Now, the picture below is a phenomenon that every Filipino motorist has to deal with on a daily basis: 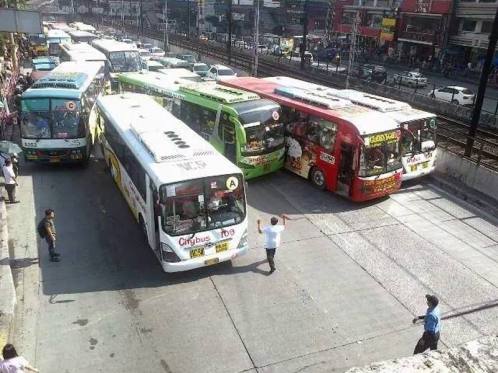 Now,  given the fact that I (and at least a handful of others) witness this sort of chaos every day while driving on most major Metro Manila thoroughfares, would you really say that Mr. Inton’s proposal is the best? One is compelled to think how much LTFRB officials earn by protecting the interests of these bus operators. In the midst of this chaos, not once have I seen any of these bus drivers and operators pay the penalty for clogging up Metro Manila’s major highways. From my perspective, it seems that every person supposed to be in charge of organizing Metro Manila traffic (from the level of the lowest-ranking LTFRB, MMDA, and local traffic enforcement lackey up to their top brass) is keen on preying upon private motorists for the slightest infraction yet they would never tangle with the perennial traffic violators driving buses and jeepneys. That’s concrete evidence of impunity in Philippine culture, folks! I’d like to add as well that it simply is idiocy to propose solutions that don’t address the problems that are clearly seen.

Given the picture above, the solution seems obvious: a massive redesign of Metro Manila’s public transportation policies. Things that come to mind include one of the following:

Now, I understand that given the hypersensitive hair-trigger temper of my fellow countrymen (“balat sibuyas”), many will object to such suggestions which, I would admit, are not in any way unique. Such objections are the result of many things not limited to preference to the status quo, resistance to change, and resistance to any exercise in disciplined and organized behavior (as evidenced by the aversion to following rules such as the use of pedestrian walkways, a topic for another time). I also understand that implementing changes involves systemic revision, hence it is in no way easy. However, we have to start somewhere. The realization that a cultural change should happen has been long overdue hence this rather small reminder in cyberspace that the Filipino needs to shape up if it wants to deserve the sort of pride  it desperately clings on to. Perhaps it’s about time by starting to change how we Filipinos behave while we’re on public streets. If we Filipinos, as a culture, persist on keeping such chaos described above as the norm, we’re just demonstrating to the world the prevalence of idiocy in our country.